9 Easy Songs to Play On Drums (For Newbs & Beginners)

Are you looking for a few easy songs to play on drums?

You've come to the right place!

In this guide to easy songs to play on the drums, you will learn: 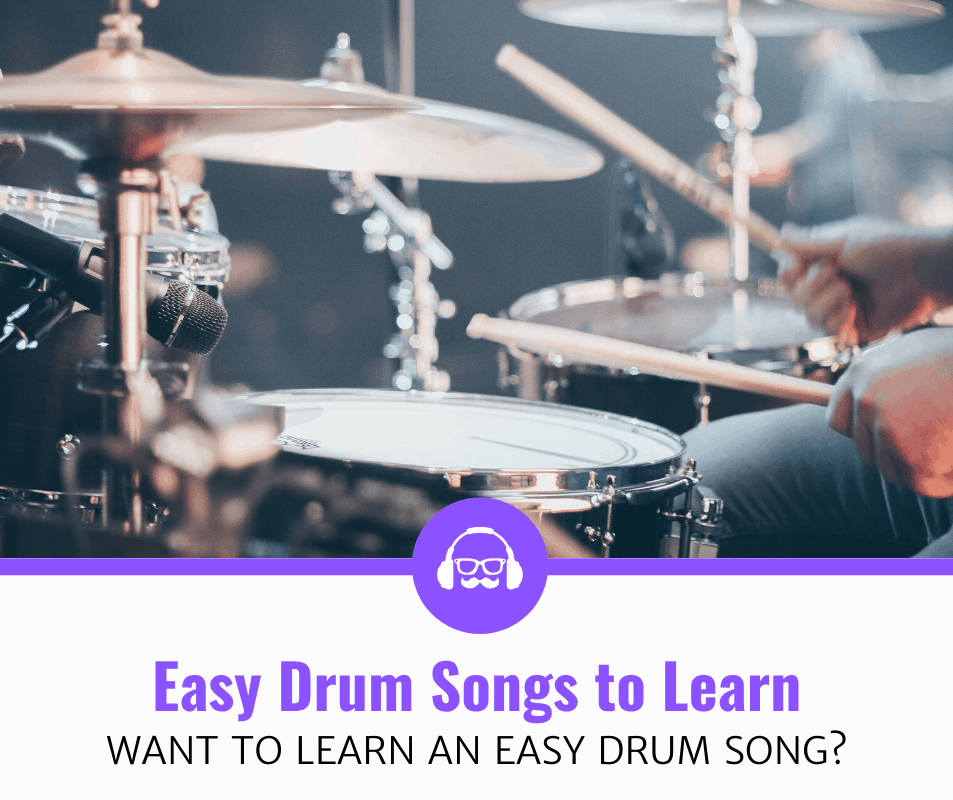 Learning the drums is an incredibly fun and rewarding activity. Once you’ve caught the drumming ‘bug’ it’s hard to stop. However, many beginners can often find it hard to find music to practice their newly learned skills.

In this article, I’m going to show you some awesome songs that are a great start for any new drummer, as well as being loads of fun to play!

What's In This Guide?
What Type Of Songs Are Good For A Beginner?
What Are The Best Easy Songs To Play On The Drums?
The White Stripes - Seven Nation Army
The Strokes - Last Nite
The Roots - The Seed 2.0
Michael Jackson - Billie Jean
Metallica - Sad But True
Nirvana - Lithium
AC/DC - You Shook Me All Night Long
Greenday - Brain Stew
Art Blakey and the jazz messengers - Moanin
Final thoughts

What Type Of Songs Are Good For A Beginner?

The main things you need to watch out for as a beginner is the overall complexity and tempo.

If a song has an overly complicated drum beat or it’s too fast then it’s going to be incredibly difficult to get to grips with on the drum set. This can leave you feeling frustrated and demoralized when you feel like you aren’t able to get close.

Remember that drumming is much more about keeping good solid time and having a good feel than blasting crazy chops around the drum kit. Therefore some good old fashioned 4/4 classic rock tunes are a great place to start.

Most AC/DC tunes are great fun to jam along to and use a lot of very simple 8th note rock grooves and fills.

Another great way of practicing your consistency, feel and time is playing along to some Hip Hop. Hip Hop is often very repetitive in the rhythm parts due to the use of looped drum samples.

This gives a beginner a great opportunity to practice a groove, whilst focusing on keeping good time without worrying about the song suddenly changing section.

Songs like The Notorious B.I.G - Hypnotize have a simple groove that most beginners can get into right away.

Let’s have a look at some easy drum songs to get you jamming away on the kit in no time!

Read More >> What Are The Best Inexpensive Drum Sets?

What Are The Best Easy Songs To Play On The Drums?

Seven Nation Army was the anthem of the 2000s. It was absolutely everywhere, and rightly so as it’s one of the catchiest riffs ever written (thanks Jack!).

The drum part for this song is satisfyingly simple, without being boring. The verses are made up of a neanderthal like quarter note thump on the floor tom and kick.

After a beefy tom build-up, the choruses explode with a huge crash cymbal led groove, that has a bit of a tricky turn around to watch out for at the end of the riff.

A lot of people give Meg White stick for being a bad drummer, however, I would have to disagree.

Without her simple (almost childlike) grooves the White Stripes would never have sounded the way they did. She creates parts that fit the song perfectly without getting in the way.

This is one of my go-to beginner songs for my students during their first few drum lessons. It’s a great way of getting into playing a whole song start to finish in a relatively short amount of time.

Staying in the 2000s, The Strokes breakout single ‘Last Nite’ is an excellent lesson in simplicity and discipline. You’ll notice there aren’t any fills as the song relies on subtle groove changes to accent the different sections.

The main groove is based around a quarter note hi-hat that has bass drums on the ‘ands’ every second bar.

This gives a nice upbeat, ‘bouncy’ feel that can take a little practice to get up to speed without changing the hi-hat pattern itself.

It’s also a great song to practice moving your dominant hand around the kit without changing the drum beat (as your leading hand moves from the hi-hat to the ride for different sections).

Here’s a great example of Hip-Hop drumming at it’s finest. The drummer is Questlove and he just sits in the pocket from the start all the way to the end.

The main groove is a bouncy 8th note hi-hat pattern, but there are some simple bass drum variations throughout that are fun to figure out.

The fills in this track are also a great lesson in confident simplicity. Each one isn’t hard to play, but for them to work, you need to play them with authority. They’re the kind of fills you can learn, then throw them in your back pocket for use on other tracks.

Overall it’s a great track to jam to on the drums.

An absolute classic! Billie Jean has one groove all the way. It’s a fantastic song to practice keeping good time with a 4/4 straight-ahead rock groove.

It’s also an excellent stamina builder. Keeping the groove solid and in time for the whole 5 minutes takes a great deal of concentration and control when you’ve only recently picked up the sticks.

If you’re into the heavier side of music then Metallica is a great place to start on the drums.

Lars Ulrich tends to favor simplicity in his groove construction, rather than the insane chops and speedy drum fills of some of his metal drumming counterparts.

Sad But True is a classic tune from Metallica’s infamous ‘Black Album’. It starts with some huge neanderthal like drum fills in the intro.

Before smashing into the verse with one of the most famous, yet simple, snare drum fills of all time (‘RA-TA-TA-TA-TA!!’).

Sad But True is a super fun beast of a tune and is great for practicing playing loudly but with control and solid time.

Another track by Metallica to have a go at is Nothing Else Matters, it’s a bit more of a ballad but has some great drum parts!

Dave Grohl is a master at creating perfect (yet simple!) drum parts that even non-drummers end up air-drumming along to. Lithium is a great example of dynamic drum playing and is one of Nirvana’s easiest songs to start with.

The verses are played at a low volume, with just 8th notes on the ride, cross-stick snare on 2 and 4, and some interjecting bass drum notes.

This transitions into a huge chorus that gives you an opportunity to unleash your inner ‘Animal’, before dropping right back down for another verse. This is a great example of using dynamics within a song, an essential skill for any drummer to practice.

Check out Nirvana - Come As You Are as another awesome track to get stuck in to.

Read More >> ​How Do You Play Electronic Drums (For Beginners)?

AC/DC - You Shook Me All Night Long

Phil Rudd is a master at just laying down a groove and not messing with it. This track from Aussie rockers AC/DC is no exception.

The straight 8th note rock grooves drive the song along without being flashy and his placement of crashes and simple fills add excitement in all the right places.

The main thing to focus on when playing this track is not rushing, the groove can sometimes feel faster than it actually is!

Brain Stew isn’t one of Greenday’s biggest tunes, but I love it for its simple yet incredibly catchy riff. It’s a song that strays away from the usual fast punky upbeat formula Greenday is known for, instead it has a more laid back almost half time feel.

In the main groove has two 16th note kicks in a row over an 8th note hi-hat that is a great exercise in coordination.

The key is to try and forget about your dominant (hi-hat) hand and fit the second kick drum note in between the hi-hat, rather than playing an extra hi-hat at the same time.

Overall it’s a great tune to just throw on and blast away to (especially the outro!).

This list wouldn’t be complete without a cheeky jazz number. Moanin is a great track for any beginner that wants to start exploring the world of jazz drumming.

There are some great ‘swung’ full band hits during the intro that take some practice getting consistent and in time.

Once the main groove kicks in, it’s based around a standard jazz ride swing pattern. If you don’t know how to play a jazz ride pattern, here’s a great video of John Riley explaining it.

This track is an excellent opportunity for you to practice your jazz ‘comping’ and triplet based ‘swing feel’.

Read More >> How Do You Play Drums As A Beginner?

So there you have it! 9 great tunes for any beginner to have loads of fun playing along to as well as helping you improve.

Remember to take your time learning any new material and SLOW IT DOWN. Take the groove apart and play it to a metronome if you can’t get it right away. You’ll learn things much faster that way.

Keep your eyes peeled for more upcoming articles and resources for beginner drummers here at YourMusicInsider.com. 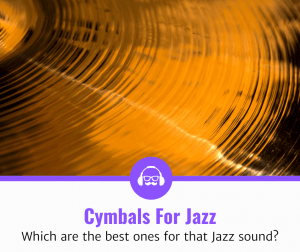